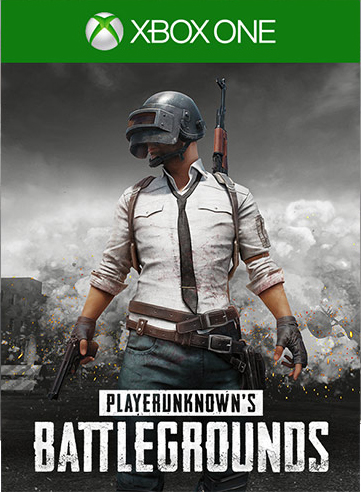 Shouldn't that be shortened to "PB" then?

As you leap from the aircraft into the clear sky, the whole island is yours for the taking. With no time to delay, you pick you landing spot. Somewhere near that large airfield, you think. There are bound to be some good weapons there. Looking around as you touch down, it seems a few other people have had the same idea as you. You count seven, maybe eight as you sprint for the nearest building. Grabbing the first gun you see and that police vest that was lying next to it, you clip in a full magazine. You feel ready, but surely no chicken dinner is worth this!

What more is there to say about the battle royale genre? Everything about it, from the paracute descent, to the ever decreasing play area to the random weapon placement has become so commonplace in gaming that it's almost cliché. PlayerUnknown's Battlegrounds may not have been the first, but it was the first one to truly popularise the genre and after nine months in Game Preview, the full game is now available on Xbox One. Compared to the state it was in when it first launched late last year, version 1.0 is a massive leap forward although it's still not perfect. Playing on a One X, there are still multiple occasions of textures popping into view but no longer to the extent that it feels broken. Bluehole should be commended for the work they have done to bring it up to this standard.

The step up to full release has brought with it a couple of updates. Notably the arrival of a new map and an Event Pass that bears more than a passing resemblance to one of Fortnite's battle passes. You can progress through the tiers and unlock new equipment by completing missions as you play. These range from simply racking up a certain number of kills to more specific challenges related to
single weapons. As you'd expect, there's a pass you can purchase from the Xbox store that will advance you through the tiers a little quicker but whether that's a good thing or not is down to personal preference. I've never spent real money on such things and I'm not going to start now!

This brings the map count up to three and there's a nice variety to the environments on offer. Adding to the forest island of Erangel and the wide open desert spaces of Mirmar we now get the smaller tropical paradise of Sanhok which is half the size and makes enemy encounters happen more often. You can alter your desired playlist, allowing you to single out Sanhok as your map of choice, but it still randomly chooses between the two larger maps when you start a match. Being able to choose where you want to fight before matchmaking would have made a huge difference.

What makes battle royale so enjoyable is that it appeals to people who don't normally like online shooters, like myself. Even though there are a possible 100 players in each match, there are long periods where you won't see anyone else and during those moments it can feel like a single player game. You have complete freedom to play it your own way. Making your own fun as scavenge for weapons, driving vehicles over hills and running for the safe zone. The firefights, when they inevitably come, are usually fast and over in seconds. You will die a lot, especially when you first start playing. Actively avoiding other people is a genuinely viable way to play, which is unusual for an online shooter.

While I definintely enjoy playing PlayerUnknown's Battlegrounds, it's not really a game that has grabbed me completely. It's more something that I'll pick up now and then for a few matches, before
retreating back to whatever else I'm currently playing. But that's true of the entire battle royale genre. If it's something more immediately enjoyable you're after then I can't recommend this over either Counter-Strike or Rainbow Six Siege but it's definitely something worth having in your library alongside them.
7 / 10

Played over 30 hours in Game Preview and then another couple of days assessing the full release for the purposes of this review.