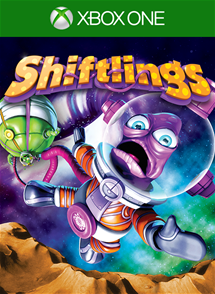 It's not uncommon these days for games to arrive with a game-breaking element of which the developers were unaware. These are usually promptly fixed with a quick update, but in the case of Shiftlings, the game-breaker is something that Rock Pocket Games are more than aware of and cannot be fixed with a day one patch – its controls.

This is a game in which you control two characters simultaneously, a pair of workers at a galactic maintenance company, who are tethered together with an air tube. To complicate matters, one of them has hit a gas outlet and inflated his space suit into a giant ball meaning that, at any given time, one of them cannot pass through smaller gaps or jump over obstacles. The goal is to guide the two across each level to a maintenance terminal and then to the exit avoiding all of the deadly traps in the process.

All of the fundamentals of the game are sound. The level design and puzzles are challenging but not too challenging and working out how to reach some of the hidden bottles will raise a smile of satisfaction. The visuals too are nice and colourful if occasionally a little too cluttered. Music is a little irritating after a while as are the “humourous” quips from the game's host during play but nothing that would make you want to switch off.

Which brings me to the controls, which are just plain awful. I was constantly getting the buttons to switch character and pump the gas mixed up, forcing me to repeat sections or, worse, die and restart the level. I can think of at least two control methods that would have been better and more intuitive! Why not have each character controlled independently with both joysticks? It's slightly better when played in co-op as it removes to need to swap character but giving both players control over the gas pumping means you are constantly both pressing it at the same time.

Rock Pocket Games are not a team that I've heard of before but the artists, musicians and level designers should be really upset with the programmers who were in charge of the control scheme as it turns Shiftlings from a game that should be relaxing and enjoyable to play into one that's a rage-inducing chore.
4 / 10